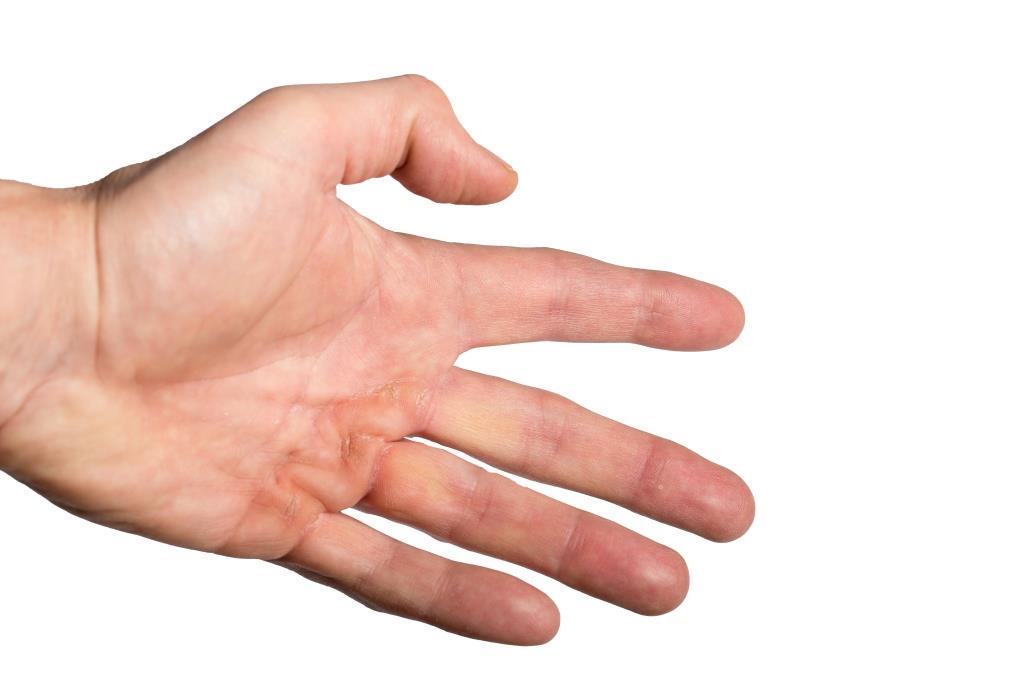 Palmar fibromatosis (also called Dupuytren’s disease or Dupuytren’s contracture) is a disease of the soft tissues of the hands and fingers. It is characterized by typical, painless nodules in the palm (i.e., the volar aspect of the hand). Men over 30 years of age are at highest risk to develop palmar fibromatosis; the male-female ratio is approximately 7:2. The condition may affect both hands and, over time, multiple nodules may fuse together. The precise etiology of palmar fibromatosis has remained unknown. Several lines of evidence point to a genetic origin of the disease, although the exact genetic mechanism has not yet been identified. Among the risk factors for developing palmar fibromatosis are a positive family history, uncontrolled diabetes and alcoholism. It is of note that 5-20% of the individuals with palmar fibromatosis also develop plantar fibromatosis (Ledderhose disease), and approximately 4% of the individuals with palmar fibromatosis also develop penile fibromatosis (Peyronie’s disease). Treatment options comprise conservative management, steroid injections, radiotherapy and surgery (in case the symptoms become intense). Surgery may involve dermofasciectomy, which is a procedure to remove the fascia followed by skin grafting. The disease often shows recurrence after treatment.

Penile fibromatosis (also called Peyronie’s disease or induratio penis plastica) is an acquired curvature of the penis that can cause erectile dysfunction. When present, pain occurs early in the disease process and lessens with time. Diagnosis is based on the clinical features of the disease. At the microscopic level the disease is characterized by the deposition of collagen and fibrin and a reduction in elastic fibers, resulting in plaque formation in the tunica albuginea. This scarring of the penis leads to its bending during erection. It has been proposed that penile fibromatosis results from abnormal wound healing, and the deposition of collagen and fibrin might be the result of a microtrauma. This is supported by the finding that soft tissue trauma can cause increased levels of transforming growth factor β1 (TGF-β1), potentially leading to a proinflammatory and profibrotic cascade wih subsequent deposition of collagen. However, a unifying pathophysiological understanding of the disease process has not become available. The population incidence is approximately 1-3% among male individuals, with peak incidence occurring between 40 and 70 years of age. 20–40% of men with penile fibromatosis report erectile dysfunction, and it has been estimated that the disease has significant psychological effects on up to 77% of all affected men. Notably the number of patients suffering from penile fibromatosis has apparently increased since the advent of oral sildenafil (“Viagra”). Because of the missing unifying pathophysiological understanding, no therapeutic modalities have provided patients with reliable results and resolution of their symptoms. All therapeutic modalities that are nowadays in use aim at manipulating some components of wound healing. Among them are oral supplementation with vitamin E, omega-3 fatty acid and antioxidant coenzyme Q10, as well as pentoxifylline (a nonspecific phosphodiesterase inhibitor with antifibrotic and anti-inflammatory properties). Other therapeutic strategies involve topical application of verapamil, trifluoperazine or magnesium sulfate, iontophoresis, intralesional injections of corticosteroids, collagenase, verapamil and interferon alpha, radiation therapy and penile traction therapy. Recently, extracorporeal shock wave therapy (ESWT) was demonstrated being effective for penile fibromatosis. The specific molecular and cellular mechanisms of action of ESWT in penile fibromatosis are still unknown. However, it is reasonable to hypothesize that they are linked to ESWT’s proven beneficial effects in wound healing.